The Lady of Elms, Ruler of the Deepwinter March The Lady of Elms usually rules from her “palace” in Deep Ellum, where she’s surrounded by hangers-on. She’s also just as likely to “rule” from her secondary seat of power beneath the streets of Oak Cliff in the Orc Marches.

Though, as the ruler of the Orcs of Dallas, she’s generally a rather aggressive and violent individual… there are times when her other side is closer to the surface.

Like all fae (and for that matter, women)… she can go from terrifying to heart-rendingly beautiful in the blink of an eye. In her role as the mistress of the arts of Deep Ellum, she has inspired entire generations of music and musicians.

By mortal definitions, she’s completely insane … and just like The Leannan Sidhe does with Harry … has a terrifying grand purpose to it all.

The Model for The Marchioness is the amazing Jolien-Rosanne and her “Vampire Queen” from the Elf Fantasy Fest 2011… please please check out her work.

ps – These images found via Google and used without permission, should Ms. Jolien-Rosanne ever stumble across our site, please don’t be mad. We love your work and it inspired a major villain in our RPG campaign. 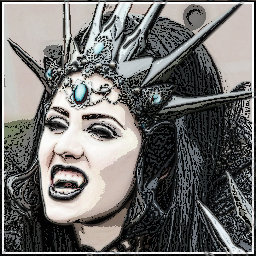