Staple was a particularly violent and aggressive member of The OCT in his younger years. If he still looked anything like he did as a mortal, he’d be wanted for 14 murders in the Dallas Fort Worth metroplex area.

When his Orc nature finally made it difficult for him to stay aboveground, he went below and discovered that he was the nastiest Orc in the bunch. Actually that suggests that he went below willingly… actually Hell T put an axe into his face as the final blow of a dominace duel as he told Staple to GTFO. He got the nickname staple from how he put his face back together afterwards (before then he was Dashawn Johnson).

He is now “the Underboss” – the most powerful Orc below the surface and the “right hand” of The Marchioness. 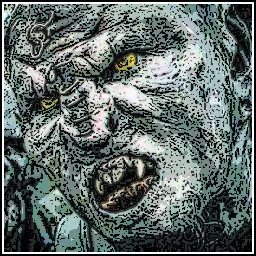