I first heard this in 2009 and had forgotten it until recently. This could be Claret’s theme song too… but due to the musical quirkyness I think it’s slightly more Pallas than Claret.

NOT safe for work Paul Alexander Amsel was born in Arkansas to a family with an abusive, rapist truck driver father, a broken woman for a mother who lived in fear of when he would come home from a long haul, and an older sister that killed herself when she was 17 (guess for yourself the reason). Any family that lived nearby in their trailer park were alcoholics and/or couldn’t care less about Paul and/or his sister and family… or were themselves abusive to their own family.

Though he would vehemently deny that his painful childhood has anything to do with his adult life, he developed a strong dislike for most men as a young boy. When he was old enough to get away, he did, and lashed out at society in general and father/authority figures in specific. He embraced what there was of GLBT nightlife on the south river side in Little Rock; amongst that very very small circle of friends he found acceptance. He wore his non-conformity like a uniform and badge of honor. … this really doesn’t need much elaboration once you read the Aspect. He’s originally from Arkansas and then moved to Texas – he’s only ever known the southern bible-belt. Actually it’s surprising that Paul is still alive. He’s scrappy and doesn’t back down… his nose has been broken more times than he can remember. You get the gist. He found a way to make money by doing computer stuff (tech support and web development) and computers have the added advantage of leaving him the hell alone. When he came to Dallas to pursue a career in the tech field … seriously jobs in Little Rock are dead and so’s the GLBT nightlife … he met Belle. They hit it off and became fast friends; Belle’s just about the most accepting person Paul has ever known. She became his first real parental figure, best friend, and only person he’d ever take a bullet for.

He joined Belle’s Kindred (the name for a group of Germanic heathens… similar in concept to a coven… ish) and got to know the Norse thing pretty well. He figured what the heck, why not, his family was German too (way way way back). Plus it was different from all the Celtic crap that was so trendy.

In time, he came to know Freyja and sought out magics on his own related to it. Belle helped of course but for the most part Paul did it on his own. He made a pact… his life for Belle’s if it ever came down to it… for power. He considered being a bärsärk or werewolf… but those seemed so… done. He wanted something different. Ravens were different and very Norse; but the thing was, Freyja wasn’t in charge of ravens… that was kinda Odin’s thing.

Paul had made his pact with Odin (with not a small amount of hesitation… Odin didn’t seem to be the kind of God that would take kindly to a queer)… he performed his blót (Germanic blooding/sacrifice ritual) with a horse (no really, an adult horse) in the old style using an altar he made himself. He performed the sacrifice over a blazing fire of Alder wood, and carved the runes into his blood covered flesh with a seax that Belle had helped him make.

As mentioned before… Paul’s scrappy and kinda hardcore. Odin accepted the pact. Pallas the wereraven flew away from that bloody altar. One of the oldest members of The Freakshow (and the reason it has its unofficial nickname) is because of one of the earliest “adventures” between Pallas and Belle Starr.

Early on in their friendship, it became clear that they shared a quirky pastime… soccer. Pallas is an avid armchair Eurosnob supporter of FC St. Pauli (that depending on the year either plays in Bundesliga A or B – anyone that knows St. Pauli’s leftist/counterculture identity shouldn’t be surprised by this) and Belle grew up knowing that the only sports team her hippie parents ever allowed her to root for was FC Bayern (from Münich – same as her family). Belle also knows the words to the FC Bayern fan hymn/song “Stern des Südens” by heart (the song title translates to “Star of the South”).

It came about one night when they were just enjoying a FC Bayern game at Christie’s Sports Bar (in Uptown, not too far from Oak Lawn where Pallas actually lives). Belle was in her old Carsten Jancker Bayern jersey, Pallas in his brown St. Pauli one. Now it should be noted that Pallas doesn’t really like soccer, he just watches it to be different from everybody else in Dallas that prefers other sports. Because of this, he’s okay with watching Belle’s team… especially since it’s nearly impossible to get FC St. Pauli games on TV… which suits him just fine because then he can complain about the “unwashed Cro-Magnon masses” that watch American football.

They were discussing what to do about getting all their friends (minor talents and whatnot) organized somehow. They both remember the dialog and scene as going something like this:

“I don’t know… we should band together, like a Confederacy or something!” said Belle.

Pallas vehemently shook his head, “Oh hell no girl. No way we call something here in the south a Confederacy of anything!”

In an annoyed voice, Belle retorted, “You got a better name smartass?”

In typical haughty Pallas fashion, he replied, “Not yet, but give me some time and I will; and it’ll be perfect.”

Now, Pallas can “flame” (as the slang goes) when he gets animated. Unknown to both, a couple of Orcs were there as well. They were enjoying themselves with their dates and were just going to leave the strange shapeshifter and the minor talent alone. However, they overheard Pallas and their bigotry kicked in. They got up, and came over, and taunted Pallas with the lyrics to a notorious Gwar song (Have you seen me).

First Orc, “Look at this D! Hey faggot, and a corpse full of maggots!”

The second Orc picked up the sing-song line, “He likes to blow $#& not bag it!”

The rest of the scene doesn’t really need to be described. Pallas and Belle got hurt pretty bad because they fought back. Luckily two things were going for them. One, nobody punches gorgeous redheads in a sports bar with red-blooded southern boys in it. Two, Belle had a potion with her for “emergencies” that boosted her physical abilities quite well. It didn’t take long before the Orcs beat feet, chased out by three farm-fed good-ole-boys that were there to watch the Cowboys game.

When the cops and ambulance showed up to take Pallas and Belle to the emergency room for their various cuts and bruises, they overheard one of the bar patrons talking to a police officer. The line that was overheard was, “I dunno officer. Those two guys really looked weird. There was a lot of weird stuff going on, drugs or something. Hell it was a $%^*&$^ Freakshow in here for a while.”

Pallas took the bandage from his bleeding nose and just smugly looked at Belle. He drawled, “There you go. The Freakshow.”

Most of the time Pallas opens his yap to play Devil’s Advocate or to point out some glaringly stupid hole in somebody’s crazy schemes… sometimes though he just can’t keep his mouth shut when he really, really should. One time things all came to a spectacular climax when he was with Barbara, it’s still something of a watershed moment in their “relationship” (let’s be clear… Barbara and Pallas don’t really like each other… Belle’s the glue).

She had asked him to come with her to get a “reading” on a property that she had been considering for purchase (Barbara is a businesswoman and from time to time dabbles in real-estate). Unfortunately the property was also being used by some Oak Lawn Orcs as well (for what, they never learned). Everything was fine, Barbara and Pallas were “just leaving” when one of the Orcs made a comment and Pallas just couldn’t leave well enough alone. 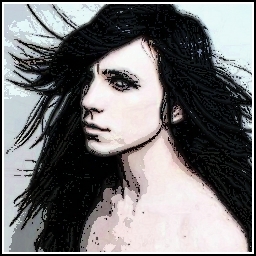