In the power vacuum created by the Red Court and White Council “decapitating” each other, many of those with powers in the Dallas area have banded together for mutual protection.

With “power centers” in Deep Ellum, Lower Greenville, and Oak Lawn, this organization refers to itself as the “Freakshow Confederacy.” If it has something that could be called a leader, Belle is it.

She’s seen from time to time at Atwaters or The Purple House on Bell. Born and raised in Fredericksburg, she’s a small-town Texas girl through and through (BBQ, blue jeans, country western music, Dr. Pepper, etc.). When she graduated high school she found a job up in Dallas (Austin just didn’t pan out… plus there were ex boyfriends and other things she wanted to leave behind) and stayed.

Side note – she speaks fluent Texas-German (Though her magic is Scandinavian themed, she doesn’t speak any actual Scandinavian tongues other than knowing a few words here and there). Her paternal grandfather (Fred Schubert) is an old school Fredericksberg Lutheran and Elder at Zion Lutheran Church (established 1852). He loves his little Rotkopf and always spoke to Belle in Texasdeutsch. (Frederich Heinz Schubert – Fred to his English speaking friends, Heinie to his german speaking friends that knew him as a boy – his middle name is just Heinz, not the full version of Heinrich)

Her parents were part of the hippie movement/Neopagan reawakening and renamed themselves “Starr” (originally it was Schubert). Belle was born after that and grew up in a home in small town Texas as a non-Christian with “weirdo” parents. You can probably guess for yourself what turned her away from the christianity of her neighbors towards “anything else.” She found the Ásatrú movement (neo-Germanic heathenry) early as a teen, and is a member of the Ring of Troth organization.

She discovered early as a kid that arguing about stuff didn’t accomplish much… it was much better to ask questions. People love talking about themselves and are less likely to pick on a kid that actually seems interested in them. Plus, with knowledge came power.

Aspect: I Don’t Judge I Just Want to Understand Her first “adventure” isn’t particularly a good story. In short, she’s became infertile due to damage to her Fallopian tubes arising from infection/complications brought on by date rape by a boyfriend as a young teen. The boyfriend got away with it (for various reasons involving his family having more money than hers) and is a lawyer in Austin now.

While recovering/healing she threw herself into her neopaganism – it was something that was uniquely hers. Her “first adventure” took most of a decade but she’s “over it” now (meaning she’s gained the defense and coping mechanisms that allow her to live her life). Freyja continued to dominate her prayers/studies/thoughts. In time, Freyja answered. Her faith in her Goddess and the magic she was given played a significant role in Belle’s recovery.

Belle gets really, really, really defensive about people she considers “hers” and tends to be very unfavorably disposed towards people who abuse power and authority to steamroll over others. She’s used her magic (Biomancy) to augment her physical traits sufficiently that she’s beat the ever living snot out of many individuals that have drawn her ire.

Unfortunately since this magic is mostly done via potions and aspected ritual magic (i.e. her sponsored Thaumaturgy) she can’t exactly use it as easily as a true Wizard… that said, she well understands the concept of “Revenge is a Dish Best Served Cold.” She’s never killed (not her style)… but she’s put people (usually dudes) into emergency rooms before… and she’s pretty much okay with it. There’s many reason the members of the Freakshow go to Belle for help, this is one.

Though some of the folks that know of her magic call her a Valkyrie… she hates that term. She serves Freyja, not Odin. Sure, death happens… and like any other Viking she’s not afraid of the concept. However, unlike Odin she does not SEEK battle and death. She has no warm feelings towards Valkyries – she’s no Chooser of the Slain. If anything, she’s a Chooser of the Living.

Aspect: Mama Bear (because she can never be one) Once her magic awakened, it became nearly impossible to hold a steady job in modern Dallas. Computers just don’t like data entry clerks that blow out their circuits every other stressful Monday.

Here in Dallas, she met and befriended another Minor Talent named Barbara. She is a keen business woman and the two friends saw an opportunity to go into business together. They purchased a well known neopagan landmark in Dallas from its previous owners and opened up “The Purple House on Bell.” Barbara did, and still does, consider it fate and a good omen that the street is named Bell just like her best friend.

Their primary customers and clients are Wiccans and neopagans of many stripes – the Wiccan Rede “An’ it harm none, Do what ye will” came to be an overriding factor in Belle’s values and belief system. The more people she met, the more she came to internalize the Rede. She wasn’t the kind to pass judgement on other people’s weirdness… she was pretty weird herself after all. One of the oldest members of The Freakshow (and the reason it has its unofficial nickname) is because of one of the earliest “adventures” between Pallas and Belle.

Early on in their friendship, it became clear that they shared a quirky pastime… soccer. Pallas is an avid armchair Eurosnob supporter of FC St. Pauli (that depending on the year either plays in Bundesliga A or B – anyone that knows St. Pauli’s leftist/counterculture identity shouldn’t be surprised by this) and Belle grew up knowing that the only sports team her hippie parents ever allowed her to root for was FC Bayern (from Münich – same as her family). Belle also knows the words to the FC Bayern fan hymn/song “Stern des Südens” by heart (the song title translates to “Star of the South”).

It came about one night when they were just enjoying a FC Bayern game at Christie’s Sports Bar (in Uptown, not too far from Oak Lawn where Pallas actually lives). Belle was in her old Carsten Jancker Bayern jersey, Pallas in his brown St. Pauli one. Now it should be noted that Pallas doesn’t really like soccer, he just watches it to be different from everybody else in Dallas that prefers other sports. Because of this, he’s okay with watching Belle’s team… especially since it’s nearly impossible to get FC St. Pauli games on TV… which suits him just fine because then he can complain about the “unwashed Cro-Magnon masses” that watch American football.

They were discussing what to do about getting all their friends (minor talents and whatnot) organized somehow. They both remember the dialog and scene as going something like this:

“I don’t know… we should band together, like a Confederacy or something!” said Belle.

Pallas vehemently shook his head, “Oh hell no girl. No way we call something here in the south a Confederacy of anything!”

In an annoyed voice, Belle retorted, “You got a better name smartass?”

In typical haughty Pallas fashion, he replied, “Not yet, but give me some time and I will; and it’ll be perfect.”

Now, Pallas can “flame” (as the slang goes) when he gets animated. Unknown to both, a couple of Orcs were there as well. They were enjoying themselves with their dates and were just going to leave the strange shapeshifter and the minor talent alone. However, they overheard Pallas and their bigotry kicked in. They got up, and came over, and taunted Pallas with the lyrics to a notorious Gwar song (Have you seen me).

First Orc, “Look at this D! Hey faggot, and a corpse full of maggots!”

The second Orc picked up the sing-song line, “He likes to blow $#& not bag it!”

The rest of the scene doesn’t really need to be described. Pallas and Belle got hurt pretty bad because they fought back. Luckily two things were going for them. One, nobody punches cute redheads in a sports bar with red-blooded southern boys in it. Two, Belle had a potion with her for “emergencies” that boosted her physical abilities quite well. It didn’t take long before the Orcs beat feet, chased out by three farm-fed good-ole-boys that were there to watch the Cowboys game.

When the cops and ambulance showed up to take Pallas and Belle to the emergency room for their various cuts and bruises, they overheard one of the bar patrons talking to a police officer. The line that was overheard was, “I dunno officer. Those two guys really looked weird. There was a lot of weird stuff going on, drugs or something. Hell it was a $%^*&$^ Freakshow in here for a while.”

Pallas took the bandage from his bleeding nose and just smugly looked at Belle. He drawled, “There you go. The Freakshow.”

So, this is the voice I hear in my head when I write for Belle.

The below video was made for laughs but it gets the idea across. 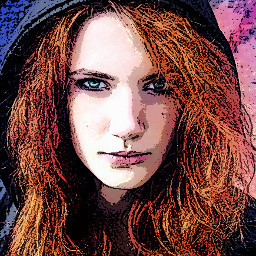