Public owner of The Purple House on Bell She is the “public” owner of The Purple House on Bell as well as a minor talent. Father from Mexico (Guadalajara), mother from Uruguay (Montevideo), they were mildly successful single, but combined to make a formidable real estate team in Mexico. Her mother was an accountant before they married, and kept the finances afterwards. Her father made a killing during the booms of Guadalajara and Puerto Vallarta (both in Jalisco). The magic comes from her mother’s side of the family (accomplished Brujería all, though her mother lacked the talent/gift). She was always judged by her looks, and after her Quinceanera it just got worse. However, she internalized her budding magic and anger, and used her charms to help bring in money. After a particularly tense negotiation which was causing her father stress, she talked her way into coming to the next meeting (at a club where a 17 year old girl was very much the center of all attention), and at that meeting, was able to seal the deal when the other party let its guard down. After that, daddy’s little girl went to as many meetings as he could get away with. Unfortunately, the family invested in some dodgy outlets and her father lost everything. Barbara rolled up her sleeves and went to work to help rebuild. However she was older, and knew that two things were true… there were better opportunities in America for her, and in America she could be far enough away from her mother’s family to set out exploring her magic on her own and in her own way. In South America, there were traditions, and those traditions were followed.

Barbara talks to everybody, anybody, knowledge is power and people you meet are potential business partners… she still sends money home when she can. Belle Starr and Barbara bought the Purple House on Bell from its previous occupants, mainly as a “base of operations” for all their future magical explorations and experiments. It’s turned into a central hub of supernatural activity.

Aspect: The Purple House on Bell So Barbara was first introduced to Anime only a few years ago, Otaku culture, role-playing games, and because her magical hexing is fairly mild… even computer games from time to time (she has a level 85 female Gnome Warlock with pink pigtails in World of Warcraft but her gear sucks because she never has time to raid).

Barbara is very new in this world, to say it wasn’t part of her life growing up would be an understatement… and frankly the intensity with which the people in it relish in their quirky oddities freaks her out a bit (all their useless trivia, how they dress, how much money they spend, etc. etc.). The people are intense, but harmless and generally nice. So, under the guise of being polite, or being “put upon” to provide transportation or a sober chaperone or whatever… Barbara goes along and plays along. But it’s a bit like Brier Rabbit and being thrown in the Brier Patch.

One of her favorite guilty pleasures is the Anime “Witch Hunter Robin” … she knows all the words to the opening song in Japanese (which she doesn’t speak) and would be mortified if anyone found her DVD collector’s edition box set… especially Erica. She’s also been secretly putting together a Witchhunter Robin outfit for next year’s A-Kon but there’s no way in heck anyone’s finding that out until it’s 100% ready. 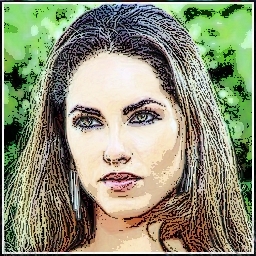